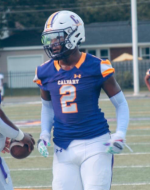 The Gamecocks were the first program to offer Smith and he has visited three times including the Georgia game and once in mid-December. He also visited Ohio State for a game in September.

“I’m going home to South Carolina,” is how Smith put it to the folks who had assembled in the gym for his announcement.

“Mike is a great guy,” said Calvary Day coach Mark Stroud during his comments prior to the announcement. “Tremendous heart. He has a great family. I think the thing that’s impressed me the most about Mike during this whole process is he’s just been humbled. He’s just had great humility. He’s just remained the same. He has a great future ahead of him.”

“He’s a guy who can play inline tight end attached and next play he can be out there by himself at wide receiver. He’s just that skilled,” Stroud said in a phone interview after the announcement. “He’s physical. He is fast. He’s very, very athletic. He’s got great ball skills. You don’t have to personnel him to get him off the field. He can play anywhere you want to play him at. I play him as an H-Back type, play him attached, and play him by himself at wide receiver. He can play at the next level exactly the same way.”

Stroud said USC tight ends coach Jody Wright developed a strong, personal relationship with Smith early on and that carried the Gamecocks through to the finish line with him.

“Coach Wright had a very good relationship with him I think all along. That’s a big part of any recruiting situation,” Stroud said. “I thought they were very authentic, very real out of the gate. He can sense that pretty well. I think they got his attention because of that. It was a very smooth process. Nothing seemed forced. Everything seemed authentic. Everything seemed with a degree of humility which I think is always important. I think the whole process drew Mike in.”