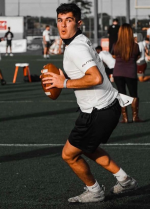 USC offensive coordinator Marcus Satterfield and new quarterback Spencer Rattler were in the spotlight last Saturday night in the season opening win over Georgia State. Fans wanted to see how Satterfield would call a game with an offense loaded with weapons, and they wanted to see how the highly touted Rattler would perform in his first game in the Garnet and Black.

One of those watching with perhaps more interest than most was USC’s 2024 quarterback commitment Dante Reno. He has seen plenty of film on the Gamecocks, and he’s seen them practice. But there’s nothing like watching the real thing in game action, and he was tuned in from his school in Connecticut as the Gamecocks battled the Panthers.

“Winning is the biggest thing, and obviously a huge thing for Spencer being his first game as the quarterback there,” Reno said. “They had a couple of drives where they didn’t finish like they wanted to. Georgia State’s a real good team. I think the offense will click this week against Arkansas. Obviously their first game of the year is a little different because of the first game jitters, and a whole new offense and whole new system for Spencer, but he’s been doing really good with it from what I’ve been hearing from what I’ve seen in practice. Getting the win was the biggest thing for everyone right now.”

Rattler accounted for 227 of the Gamecocks 306 yards by completing 23 of 37 passes. He was picked off twice. Rattler and the offense seemed to be at their best on the opening drive when they ran tempo from the first snap until Satterfield changed things up.

Meantime, the recruiting of Reno continues now that coaches can communicate directly with the 2024 class, and the Gamecocks have not let up.

“It’s been great. Nothing but love from them,” Reno said. “They’ve been great with me and my family. They text my dad on his season all the time. They’re doing a great job.”

Reno is also hearing from many of the other schools that had been recruiting him prior to his USC commitment in July.

“Some schools are still going to recruit you until you sign, other schools are honoring my commitment,” Reno said. “I talk to everybody about my situation, so they’ll know where I’m coming from. It’s the similar schools that recruited me before and offered me. There’s a couple of new ones, but there’s nothing too new because of how much I’m liked into South Carolina and recruiting for them.”

Reno has talked about moving up to the 2023 class and enrolling at USC in January. That option is still on the table, but the decision has not been made.