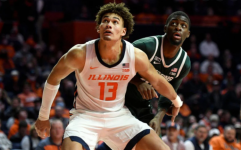 Coach Lamont Paris Wednesday added a big man to his new recruiting class of transfers with a commitment from 6-8 Benjamin Bosmans-Verdonk. Bosmans-Verdonk made an official visit to USC the end of last week and announced his decision on Twitter Wednesday afternoon. He will have three years of eligibility with the Gamecocks.

Bosmans-Verdonk is a native of Belgium who spent three seasons with the Illini where he played under former Gamecock assistant coach Brad Underwood. He redshirted in his first season due to a foot stress fracture after playing in nine games. He played in eight games the next season as he again dealt with his foot injury. Last season he played in 24 games, starting twice. He averaged 1.6 points and 2.1 rebounds per game last season.

For his career at Illinois, Bosmans-Verdonk averaged 6.4 minutes, 1.3 points and 1.6 rebounds in 41 games.

Bosmans-Verdonk is the fifth transfer Paris has taken since coming to Columbia. There are now seven in the recruiting class and a total of 12 counting on the roster for next season at this point, though transfer guard Troy Boynton is coming as a walk-on with the expectations of earning a scholarship.

Paris is also hoping to hear good news Thursday from 6-8 Julian Phillips. The Blythewood native who attended school in Missouri this past season plans to announce his future plans at 12:30 PM. USC is on his short list along with Auburn, Florida State, Southern Cal, Tennessee and the pro options. National projections have had him picking either Auburn or Tennessee.
"Don't Mess With The Feathers You'll Get The Spurs!!"​