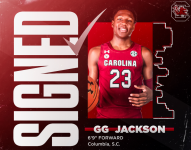 6-9 GG Jackson of Ridge View is now officially with the USC Gamecocks. The school announced the signing of Jackson Monday afternoon. The former North Carolina commitment announced on Saturday his plans to join the Gamecocks and reclassify for the 2022 class. He will join his new teammates later this summer.

“We are in the business of helping provide opportunities to young people and this is a prime example of being able to do that,” said head coach Lamont Paris in a statement released by the school. “It makes me really happy that GG will be close to his family and be able to play every home game in front of them. His game speaks for itself. He’s an incredibly talented basketball player as well as a gifted athlete. GG thinks the game is at an uncommonly high level. His versatility on both sides of the basketball is extremely rare. GG is a very high-character individual and has an incredibly magnetic personality. He will fit in perfectly with this group of young men.”

Last season Jackson averaged 22.1 points, 10.9 rebounds, and 2.3 blocks per game as a junior in helping lead the Blazers to the 2022 South Carolina Class 5A State Championship. He was named the 2021-22 South Carolina Boys Basketball Gatorade Player of the Year. The 6-foot-9, 210-pound forward had 14 points, 11 rebounds and four blocks in a 65-57 win over Fort Dorchester in the state title game this past season.

Jackson had a standout final season of AAU ball as well and was named the top performer in the NBA Top 100 Camp in June. Jackson most recently played in the Nike Elite Youth Basketball League for Team CP3. In 20 games, he averaged 12.8 points, 10.6 rebounds (led the league), and 1.9 assists per game. He shot 49.5 percent from the field and 35.1 percent from behind the arc.

Jackson gives the Gamecocks a total of eight newcomers for the 2022-23 season.
"Don't Mess With The Feathers You'll Get The Spurs!!"​