Swartz and new Gamecocks staff getting strong with their relationship

Swartz and new Gamecocks staff getting strong with their relationship​ 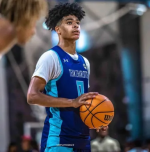 First year USC basketball coach Lamont Paris had three key 2024 targets with him Saturday for unofficial visits which featured exposure to the basketball program and taking in the football game with Georgia. Two of them, 6-4 KJ Greene and 6-2 Elijah Crawford, have offers from Paris. The third, 6-4 Austin Swartz of Concord, NC, is in the relative early stages of getting to know Paris and his staff after being recruited by the previous staff headed up by Frank Martin.

“I was getting recruited there before they changed coaches. That was my second time up there,” Swartz said. “They like me a lot. They are going to come down and see me for practices and games and take it from there.”

Swartz is a big two-guard who can score and distribute.

“I think they like what I bring to the table,” Swartz said. “He (Paris) loves people that can shoot the ball. That always makes it easier on offense. He also likes that I’m unselfish and how well I pass. He thinks that’s an underrated part of my game, and I also think that as well.”

Swartz got to spend quality time with Paris and his assistants, as well has hanging out with several of the players. He took away a very positive feeling about the new program, with the interaction between the coaches and the players standing out to him.

Clemson also is showing interest in Swartz, and he plans to visit there October 1st. He’s expecting Clemson coaches in to see him this week and USC coaches at a later date. He is going to Georgia October 8th and Virginia Tech October 17th.