Beamer's weekly news conference with quotes, notes, injury report, and the latest on Rattler's future plus videos with Beamer and players 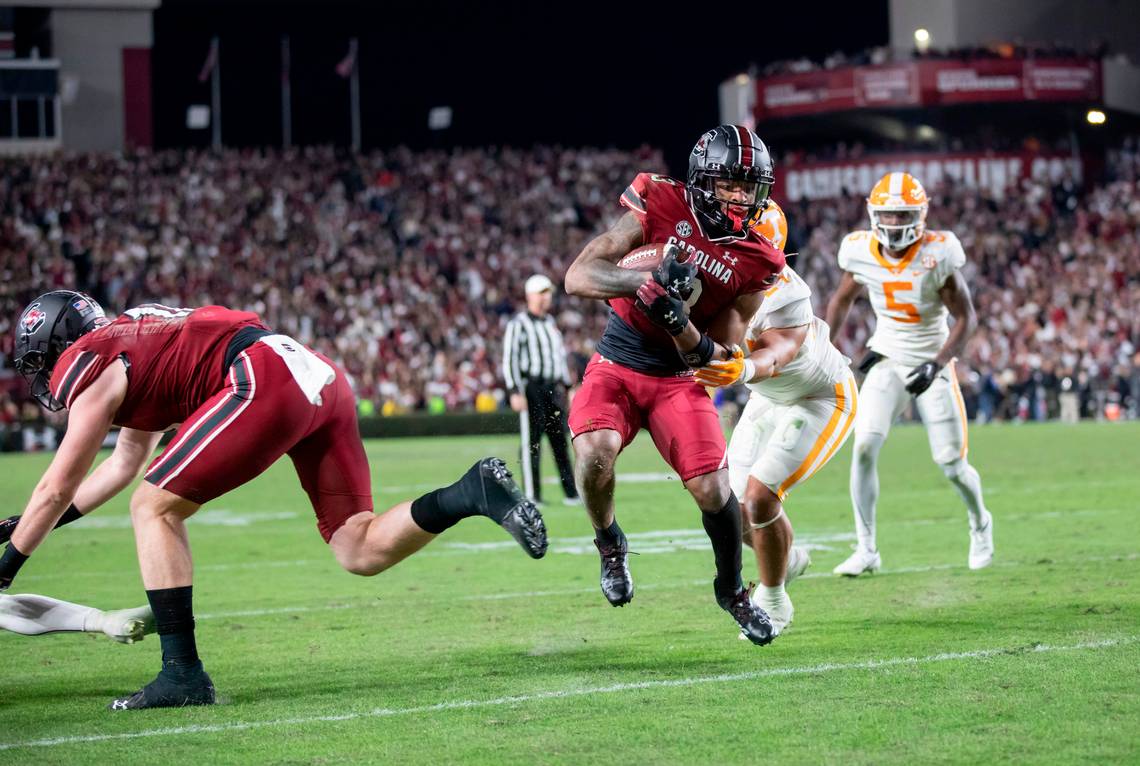 Beamer's weekly news conference with quotes, notes, injury report, and the latest on Rattler's future plus videos with Beamer and players
Nov. 22, 2022

Beamer: Clemson has 10 fumbles in their last 3 games (lost 6). Beamer says that factors into the gameplay, as they look at who carries the ball loosely, how/when/why they fumble, and then looks to force those players into similar situations. TO +/- will be key this wknd
Beamer: Playing against big QB's like KJ Jefferson and Anthony Richardson has helped prepare his guys for Clemson's DJ Uiagalelei
Beamer: The team didn't reinvent the wheel Saturday, but instead the coaches/players just executed better. He says the coaches did shrink the playbook a bit though, and perhaps had the simplest game plan of the season, but says execution was the key.
Beamer: Wants to stop talking about the Tennessee game. It's now in the past, time to move on to Clemson. Points to the team not doing a good job of that last year, as they had a big win against Auburn, then maybe didn't focus/prepare enough on Clemson.
Beamer: Both MarShawn Lloyd and Christian Beal-Smith practiced today, and are trending in the right direction to playing Saturday in Clemson.
Coach Beamer says that other than opening week of the season, rivalry week is his favorite week of the year.
Shane Beamer: Gamecocks optimistic on Marshawn Lloyd, CBS playing vs. Clemson.

Want to thank the fans for the amazing atmosphere Saturday but also what they created “all season. To sellout every single Saturday home game.” He watches as much college football as he can and sees a lot of empty seats and sees pregame walks that have very few people. Every single Gamecock Walk was “unreal.” Said the atmosphere was awesome at each game and wants the fans to know they don’t take it for granted. Saturday night was “very, very special.” Said it was a “four-hour informercial all things Gamecock athletics.”

ON LLOYD AND CBS

Lloyd and CBS were out there today at practice. Hopefully they respond the way they want/need them to. Optimistic they’ll play. Lloyd and CBS both said they’re playing this week. They’ll need them too.

Said how they move forward is to “quit talking about it.” He told Justin King to stop putting out Tennessee videos. Told him to get it out Sunday and Monday because when players get in the facilities it’s full steam ahead. Didn’t do a great job of that last year moving on from Auburn last year. Have to build on last week but it’s about moving on. Whatever they did Saturday becomes even more special if they can go up to Clemson and win.

WHAT HAPPEN ON THE OFFENSE

Asked what happened or changed offensively, said it’s simple” they played really well. They didn’t do wholesale changes but the game plan–both offensively and defensively–was a little smaller compared to previous games. They really narrowed down what they were doing. The less you do, the more looks you can rep against in practice. Then Rattler played “really, really, really well.” It wasn’t a lot of new plays. The last touchdown to Brooks was the exact same play they were criticized for running against Georgia on fourth down. Rattler throws behind him then and it’s a bad play then executes on Saturday and it’s a great call. Ran a little bit more DK Joyner but executed better top to bottom.

“We’re in good shape,” Beamer said. “MarShawn and CBS were both out there at practice today, hopefully when we come in tomorrow morning, they will have responded well to what they did in practice today and feel good. That was part of the issue a couple of weeks ago. MarShawn practiced and (the injury) just didn’t respond the way he wanted it to the next day. So we’re optimistic that he’ll feel great tomorrow morning. But when we came in on Sunday, he told me he was playing this week. He and CBS both did, so hopefully, they’ll continue to trend in the right direction because I know they both want to play and we’re going to need them.”

The Gamecocks had several players go down at various times during a physical matchup with the Volunteers but all appeared to return to action at later points in the game. South Carolina defeated Tennessee 63-38 in the matchup, dashing the Vols’ College Football Playoff hopes.

Other than the previously known serious injuries that the team has already had to learn to deal with, the Gamecocks go into this upcoming Saturday’s rivalry matchup with Clemson as a relatively healthy football team, though all teams have their share of bumps and bruises by this time in the season.

Spencer Rattler offers first remarks about the future, what’s next with South Carolina


View: https://www.youtube.com/watch?v=sheAc7R1XqQ
​
Quarterback Spencer Rattler is still weighing options for his football future. “My focus right now is just finishing out this last game or two and we’ll go from there,” Rattler told reporters at Tuesday’s weekly South Carolina media session. The former Oklahoma quarterback is in his first year at USC following his transfer from Norman in December. He has two years of college eligibility remaining but could opt to enter the NFL Draft following the season.

“(I didn’t want to) back down from competition,” Rattler said of what he wanted to improve on over the course of the 2022 season. “I could’ve gone to the Pac-12 or something like that. There are defenses here (in the Southeastern Conference) that get you better as a player. I wanted to come here and win a lot big games, which we have been doing. And we’ve still got games to finish out.” Rattler was perceived as a possible No. 1 pick in the 2022 NFL Draft before an up-and-down season at OU that saw him eventually benched for five-star freshman Caleb Williams.

The Arizona native had his best game in his brief South Carolina tenure last week in the upset win over then-No. 5 Tennessee. Rattler completed 30 of 37 passes for 438 yards and set a school record with six passing touchdowns in the contest. He was named the Maxwell Award player of the week, Walter Camp co-offensive player of the week and Southeastern Conference co-offensive player of the week. Rattler has completed 66.9% of his 311 passes for 2,406 yards, 14 touchdowns and nine interceptions seven picks of which came over the first five games of the season.

South Carolina wraps up the regular season this Saturday against Clemson. The Gamecocks (7-4) will then learn their bowl fate on Dec. 4.