Gamecocks handle in-state FCS foe SC State to the tune of 50-10 next up Kentucky with stats, quotes, notes & videos 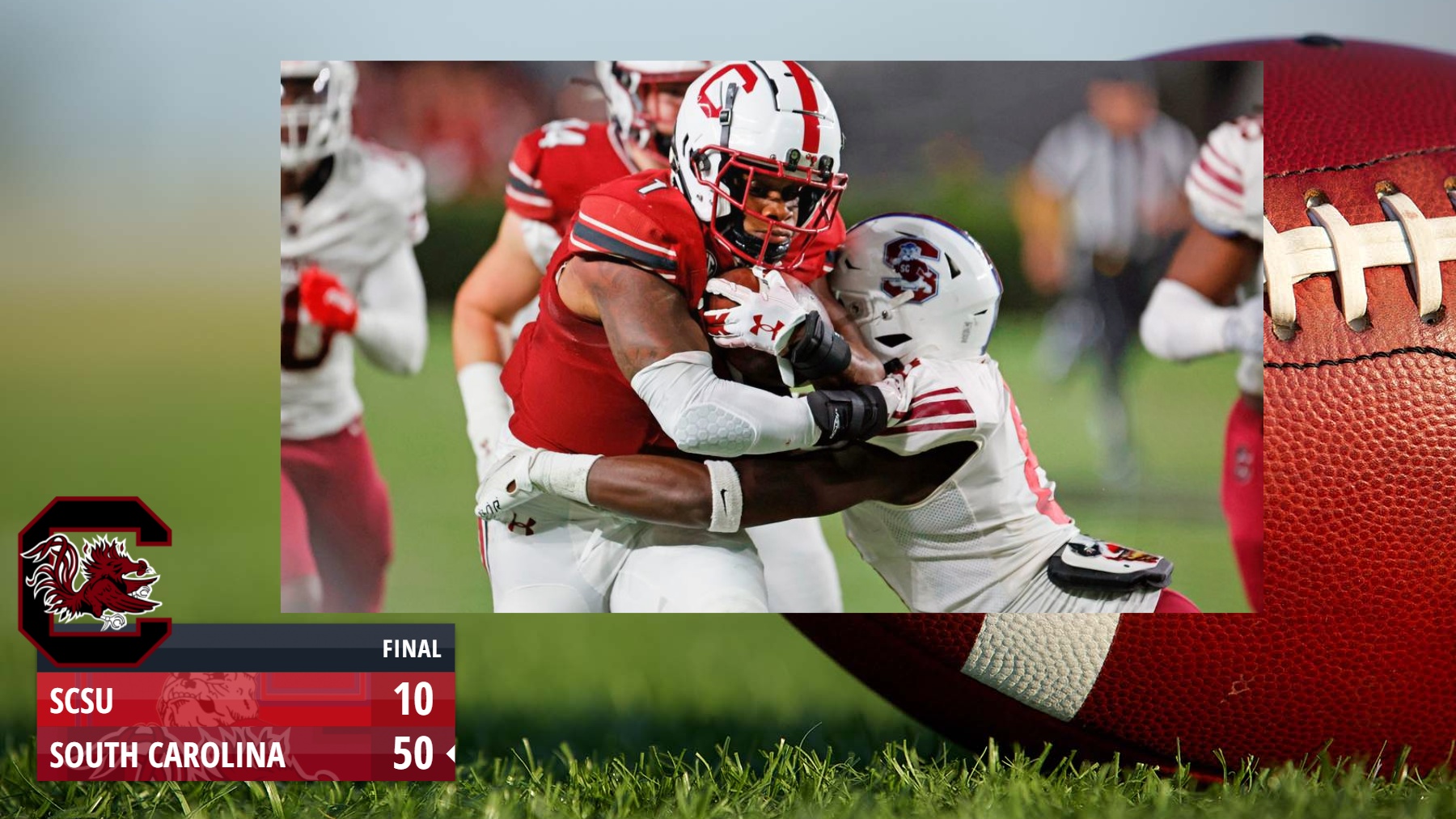 View: https://www.youtube.com/watch?v=ex0xd686go8
​
Thursday night's contest looked and felt like the last-minute meeting of SEC and FCS squads it was. Gamecocks announced an official attendance of 61,551, marking the first non-sellout of the 2022 season. The stands, too, mostly cleared out by the beginning of the fourth quarter as South Carolina raced to a 36-7 lead. Quarterback Spencer Rattler flashed the precision that made him one of the more sought-after quarterbacks in last year’s transfer portal cycle, completing 17 of his first 22 throws and 22 of 27 overall en route to a second consecutive game with a completion percentage of 73% or better.

Rattler’s two interceptions were not fought to him, receiver WR Xavier Legette. On both throws Legette watched balls go right through his hands before being deflected into the lap of Bulldogs defenders Duane Nichols and Zion Keith. South Carolina running back Christian Beal-Smith also looked increasingly like the version of the player who led Wake Forest in rushing each of the past two seasons.

Beal-Smith plowed over S.C. State’s Jamer Benjamin for a 9-yard third-quarter reception. He followed that up with a 1-yard plunge for his third touchdown over his last two games. Defensive coordinator Clayton White’s squad rebounded from a sluggish start to last week’s win over Charlotte with another productive night.

The Gamecocks limited the Bulldogs to just 160 yards of total offense through three quarters. They also notched a trio of interceptions for the second consecutive week giving South Carolina six picks in its last eight quarters of football. Head coach Shane Beamer can now exhale.

The Gamecocks are above .500 and have back-to-back victories for just the second time in his 18-game tenure. South Carolina hasn’t exactly beat up on the nation’s best, downing Charlotte and S.C. State the last two weeks, but it’s better than the alternative. With two largely comfortable wins in their pocket, the Gamecocks will now go back to SEC play on the road to face off with No. 7 Kentucky.

The Gamecocks were without offensive line coach Greg Adkins on Thursday as he’s temporarily stepped away from the program due to minor health issues, Sout Carolina announced pregame. Adkins previously dealt with a minor health scare last season and missed South Carolina’s 2021 win over Auburn as a result. Offensive analyst Lonnie Teasley will coach the offensive line in Adkins’ absence.

South Carolina recorded three interceptions for the second week in a row. The Gamecocks now have seven picks on the year.
70 Rattler completed at least 70% of his passes for the second game in a row.

South Carolina coach Shane Beamer announced right before kickoff that offensive line coach Greg Adkins was stepping away from the team temporarily due to minor health issues. Adkins is in his second year leading the offensive line. Beamer said offensive analyst Lonnie Teasley moved into Adkins’ role during the absence.

South Carolina State: The Bulldogs had lost their earlier FBS game, 56-10 at UCF to open the season. They certainly put up a better showing in their home state the campuses are located about 40 miles apart and leave with $500,000 for playing at Williams-Brice.

South Carolina: The Gamecocks got their run game going a week ago in a 56-20 win over Charlotte when they rushed for 295 yards. This time, they got Rattler and the passing game on track. Both will be needed when they return to SEC play at No. 7 Kentucky next week.
Reactions: ConwayGamecock

A solid win. It is surprising that we gained more yards against a ranked Arkansas opponent on their field, than we got at home versus SC St. We did get some very short offensive possessions that ended in touchdowns, but totaled few yards: the last four possessions totaled 14 plays but only 57 total yards - and still resulted in our last two touchdowns. But a win is a win. Now lets hope everyone rides out the storm well enough, and get ready for Kentucky...
View attachment 854