GCF players of the game vs. 49ers 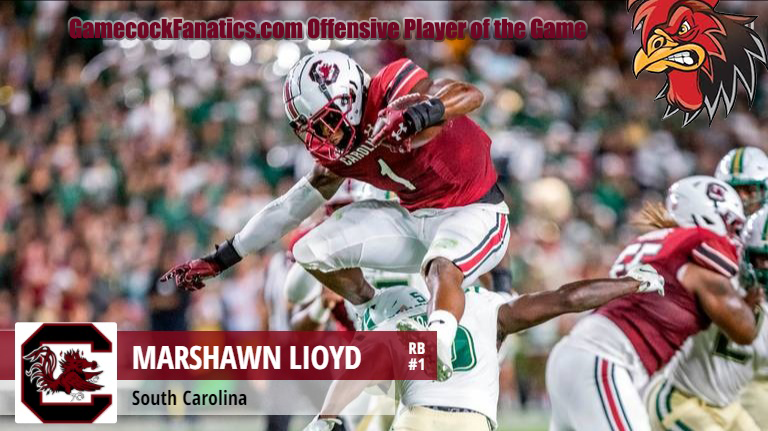 Lloyd served notice in the first half and continued his “human wrecking ball” running style to take over the game with 10:25 left in the third quarter when he scored on a 14-yard run. Lloyd had a bona fide breakout game, and something Gamecocks fans have waited for since he was a blue-chip recruit out of the Washington, D.C. area.

Coming into Saturday’s game, the Gamecocks were averaging less than 100 yards on the ground per contest. In fact, their 70.3 rushing yards per game average ranked 124th in the country. Facing a softer defense than Georgia’s stacked unit from last week, the Gamecocks established the running game early, highlighted by shifty running from starting tailback MarShawn Lloyd. The second-year backcrossed the century mark before halftime, and he made a highlight-reel hurdle en route to a 25-yard touchdown run. Lloyd finished with three touchdowns and a career-high 169 rushing yards on 15 attempts. As a team, the Gamecocks ran for 294 yards and scored six rushing touchdowns making him GCF offensive player of the game.

THE play of the game came when Lloyd huddle a 49ers player while making his way into the endzone for a TD.

https://twitter.com/i/web/status/1573830168401018883
View: https://twitter.com/MitchSummersTV/status/1573830168401018883?s=20&t=kNhFbCApqSsTEKB9nCFAbA
​
the Gamecocks had some tightening on the defensive side of the ball and boy, did they ever. After only tallying one interception on the season before Saturday, the Gamecocks recorded three second-half picks to set up three scoring drives. The first was intercepted by linebacker Brad Johnson after a batted pass by lineman Jordan Burch. The second was a first-career interception from Columbia native true freshman DQ Smith, who had 3 tackles good enough to earn GCF defensive player of the game. Also long with Johnson and DQ was veteran Cam Smith recording the third interception of the game.