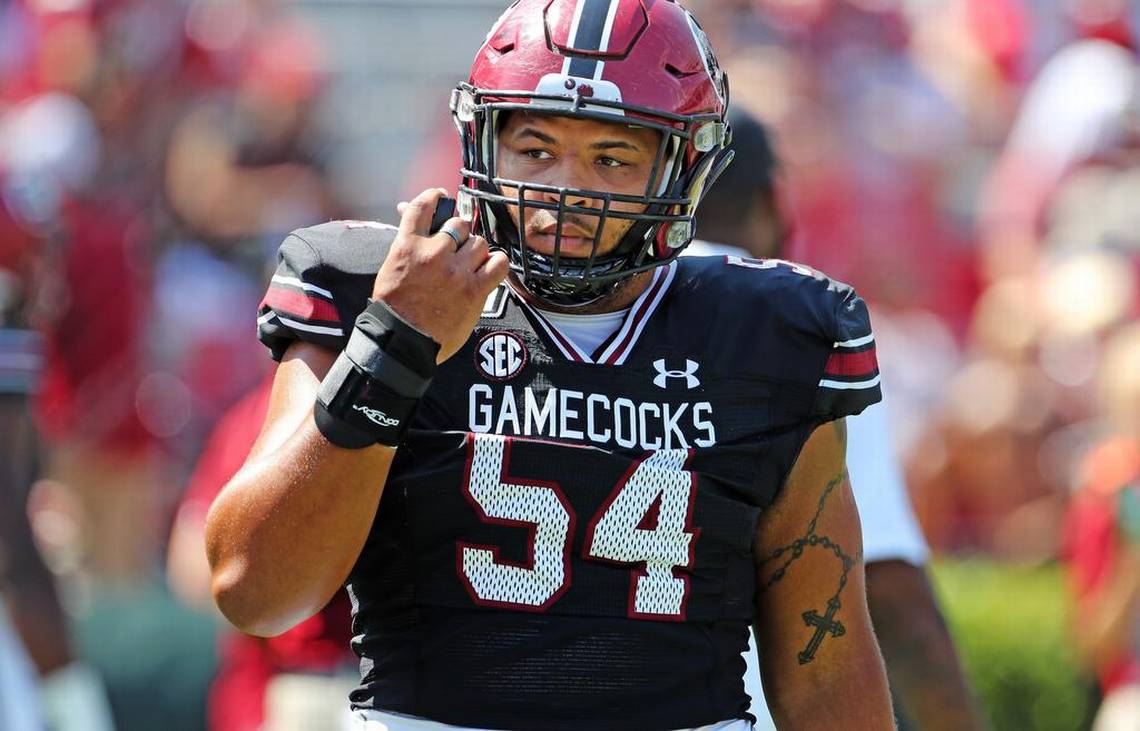 University of South Carolina senior offensive guard Jovaughn Gwyn is one of 156 semifinalists named for the 2022 William V. Campbell Trophy®, it was announced today by the National Football Foundation and College Hall of Fame.

Gwyn, a 6-3, 300-pounder from Charlotte, N.C., is a three-year letter winner and was a 2021 permanent team captain for the Gamecocks. He has started 38 games, the most on the squad, and all consecutively. A regular member of the SEC Fall Academic Honor Roll, Gwyn has also garnered the Gamecocks’ 2021 Strength & Conditioning Award and the 2021 Gamecock Toughness Award for the offense. He was the SEC’s co-Offensive Lineman of the Week following Carolina’s 2021 win over Auburn. An information science major, Gwyn earned his undergraduate degree in May. He has also been involved in numerous community service events.

“These 156 impressive candidates truly represent the scholar-athlete ideal,” said NFF Chairman Archie Manning, whose sons Peyton (Campbell Trophy® winner) and Eli were named NFF National Scholar-Athletes in 1997 and 2003, respectively. “During the past seven decades, the NFF National Scholar-Athlete Awards have recognized 891 college football players who excelled as the best our great sport has to offer. This year’s semifinalists build on the tradition, further illustrating the power of football in developing the next generation of influential leaders.”

The NFF will announce 12-14 finalists on Oct. 26, and each of them will receive an $18,000 postgraduate scholarship as a member of the 2022 NFF National Scholar-Athlete Class Presented by Fidelity Investments. The finalists will travel to Bellagio Resort & Casino in Las Vegas for the 64th NFF Annual Awards Dinner Presented by Las Vegas on Dec. 6, where their accomplishments will be highlighted in front of one of the most powerful audiences in all of the sports.

Live during the event, one member of the class will be declared the winner of the 33rd Campbell Trophy® and have his postgraduate scholarship increased to $25,000.

Nominated by their schools, which are limited to one nominee each, candidates for the awards must be a senior or graduate student in their final year of playing eligibility, have a GPA of at least 3.2 on a 4.0 scale, have outstanding football ability as a first-team player or significant contributor and have demonstrated strong leadership and citizenship. The class is selected each year by the NFF Awards Committee, which is comprised of a nationally recognized group of media, College Football Hall of Famers, and athletics administrators.

“The NFF would like to personally congratulate each of the semifinalists as well as their schools and coaches on their tremendous accomplishments,” said NFF President & CEO Steve Hatchell. “We are extremely proud to highlight their achievements, showcasing their ability to balance academics and athletics at the highest level. The NFF Awards Committee will have an incredibly difficult task in selecting the finalists from this outstanding group of candidates.”

Launched in 1959, the NFF National Scholar-Athlete Awards Presented by Fidelity Investments celebrate their 64th year in 2022. The awards were the first initiative in history to grant postgraduate scholarships based on both a player’s academic and athletic accomplishments, and the NFF has recognized 891 outstanding individuals since the program’s inception. This year’s postgraduate scholarships will push the program’s all-time distribution to more than $12.3 million.

The Campbell Trophy® was first awarded in 1990, adding to the program’s prestige. Past recipients include two Rhodes Scholars, a Rhodes Scholar finalist, two Heisman Trophy winners and seven first-round NFL draft picks. Named in honor of the late Bill Campbell, the trophy has been prominently displayed inside its official home at the New York Athletic Club since 2013, and the winner is honored each year during a special reception at the storied venue.

Known as “The Coach of Silicon Valley,” Campbell became one of our country’s most influential business leaders, playing critical roles in the success of Apple, Google, Intuit and countless other high-tech companies. The captain of the 1961 Columbia Ivy League championship team, he found his true calling after an unlikely career change at age 39 from football coach to advertising executive. His ability to recruit, develop, and manage talented executives – all lessons learned on the gridiron – proved to be a critical component of his ability to inspire his business teams to the highest levels of success.

Later in life, Campbell was driven by a heartfelt desire to give back, and he quietly gave away tens of millions of dollars to multiple charities while also finding an hour and half each autumn weekday to coach an eighth-grade boys and girls flag-football team near his home in Palo Alto, California. Campbell passed away April 18, 2016, at the age of 75.

As part of its support of the NFF National Scholar-Athlete Awards, Fidelity Investments helped launch the NFF Faculty Salutes, which recognize the contributions of the faculty athletics representatives (FARs) at each of the institutions with a finalist for the Campbell Trophy®. The NFF will present each of the finalist’s FARs with a plaque and Fidelity will donate $5,000 for the academic support services at each school. The salutes have recognized 152 FARs since the program’s inception, and Fidelity has made a total of $755,000 in donations.