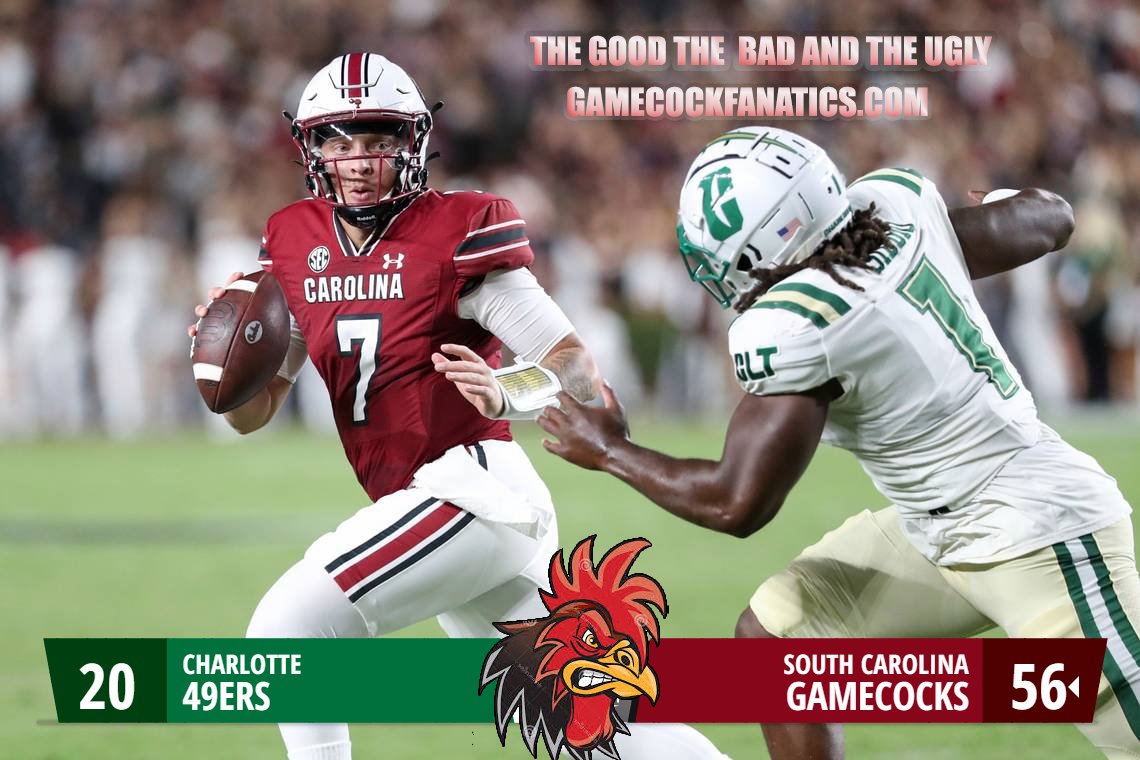 The good the bad and the ugly with the win over the Charlotte 49ers Saturday night
Sept. 25, 2022

Here’s a look at the good, the bad, and the ugly in South Carolina’s 56-20 win over Charlotte on Saturday night at Williams-Brice Stadium

Health: Injuries: Finally game without any bad injury news, especially on the defensive side have ravaged the Gamecocks so far this season. Gamecocks still had a handful of players out Saturday in offensive lineman Dylan Wonnum and defensive backs Darius Rush and David Spaulding. However, the Gamecocks'defense does appear to be getting gradually healthier. Veteran defensive backs Cam Smith and R.J. Roderick both saw action Saturday, along with defensive lineman Alex Huntley, after all, three players missed time with an injury early in the season. Transfer wide receiver Corey Rucker also played for the first time for the Gamecocks this season.

The ground game: O'yes we all have been waiting on the running and it finally showed Saturday night with LIoyd leading the way. Coming into Saturday’s game, the Gamecocks were averaging less than 100 yards on the ground per contest. In fact, their 70.3 rushing yards per game average ranked 124th in the country. Facing a softer defense than Georgia’s stacked unit from last week, the Gamecocks established the running game early, highlighted by shifty running from starting tailback MarShawn Lloyd. The second-year backcrossed the century mark before halftime, and he made a highlight-reel hurdle en route to a 25-yard touchdown run. Lloyd finished with three touchdowns and a career-high 169 rushing yards on 15 attempts. As a team, the Gamecocks ran for 294 yards and scored six rushing touchdowns.

Second-half defense: The defense makes adjustments for the second half. Only up by one score at halftime, the Gamecocks had some tightening up to do on the defensive side of the ball, and boy did they ever. After only tallying one interception on the season before Saturday, the Gamecocks recorded three second-half picks to set up three scoring drives. The first was intercepted by linebacker Brad Johnson after a batted pass by lineman Jordan Burch. The second was a first-career interception from Columbia native DQ Smith, and the third went to veteran Cam Smith.

Clean football: The Gamecocks played a clean game offensively, relying heavily on the running game to power the team’s offensive attack. After throwing five interceptions in the team’s first three games, quarterback Spencer Rattler delivered a more efficient performance, completing 17-of-23 passes in a game where he didn’t need to throw the ball often. In relief of Rattler, backup quarterback Luke Doty threw an interception in the fourth quarter with the game already out of reach.

Third-down defense: Third downs have been problematic for the Gamecocks this season on both sides of the ball, but they were especially problematic for USC’s defense on Saturday. In the first half, the game had the makings of a shootout with how easily Charlotte quarterback Chris Reynolds was finding open receivers. The 49ers converted all seven of their first seven third-down attempts and didn’t punt for the first time until the waning seconds of the first half.

First-half penalties: Though the Gamecocks defense would turn things around in a big way in the second half, self-inflicted mistakes hurt the team early. The Gamecock secondary was called for three pass interference calls in the first half, which helped extend Charlotte drives. A fourth pass interference call in the end zone was declined as the 49ers scored on the play.

The broadcast: Not often featured here, Saturday’s television broadcast earns a special nod for drawing the ire of Gamecocks fans. According to several displeased viewers, the ESPNU broadcast of the game was plagued by sound issues and other issues with quality, making it a difficult watch for fans at home along with commerecil that ran so long you miss out on plays. Down right right making it a ugly telecast.