The good, the bad the ugly vs South Carolina blowout win over SC State 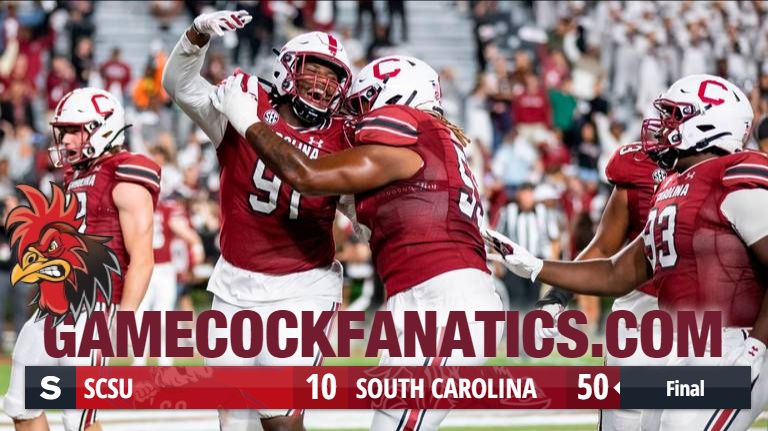 The good, the bad the ugly vs South Carolina blowout win over SC State
Step. 29, 2022

Here’s a look at the good, the bad the ugly for South Carolina football (3-2, 0-2 SEC) in the Gamecocks’ Thursday night 50-10 win over S.C. State at William Brice

Early scoring: One of the issues Carolina has had far this season is getting off to a strong start offensively. In the first four games of the season, the Gamecocks failed to score a first-quarter touchdown, which didn’t hurt them in wins against Georgia State and Charlotte but did put them behind in both SEC games. On Thursday night, the offense got off to a somewhat shaky start after a dropped pass led to an interception on the first drive, and the S.C. State defense forced a stop on the second drive. But the Gamecocks finally scored a first-quarter touchdown on a screen pass to MarShawn Lloyd for the first time this season.

MarShawn Lloyd: Lloyd, continues to serve as one of the focal points on the offensive side. He leads the team with eight touchdowns, six rushing, two receiving and after exploding for a career performance against Charlotte last week, Lloyd scored two touchdowns Thursday and was the Gamecockks' leading rusher on the ground. Lloyd finished with 80 rushing yards on 11 attempts tonight. The running game scuffled through the opening weeks of the season, but Lloyd and the Gamecocks will try to carry their newfound rushing momentum into SEC play starting with Kentucky next Saturday.

Spencer Rattler: Though the level of competition isn’t what he’ll face in the SEC, Rattler played a crisp game at quarterback for the Gamecocks. Both of Rattler’s interceptions were good throws that were dropped by the receiver, and Rattler showcased his accuracy and playmaking ability on a handful of plays. At the start of the second quarter, Rattler launched a 54-yard pass to receiver Jalen Brooks, setting up a touchdown drive. In the third quarter, while facing pressure from the S.C. State defensive line, Rattler stepped up in the pocket and threw a pinpoint 15-yard touchdown pass to tight end Austin Stogner his former teammate at Oklahoma. Rattler completed 21 of 27 passes for 212 yards and two touchdowns before being spelled by backup Luke Doty late in the game.

Punt returning: Yes it was a blowout win but still punt returner/receiver Josh Vann had difficulty handling punts in the second half most notably fumbling a punt in the third quarter that was recovered by S.C. State.

Crowd: Thursday’s game wasn’t lacking energy. The student section was certainly still full. However, the stands weren’t as full as they could’ve been had Hurricane Ian not forced the teams to move the Saturday game to Thursday. The final attendance total for Williams Brice-Stadium was 61,551 after three straight home sellouts to start the season.

Xavier Legette: The veteran receiver turned in a night to forget for the Gamecocks, dropping two catchable passes that resulted in S.C. State interceptions. The first came on the first drive of the game, when Rattler launched a deep shot into S.C. State territory. Legette wrapped his hands around the ball but couldn’t hold on, bouncing up to the S.C. State defender. The other interception came in the red zone in the second quarter, when Legette couldn’t hold onto a pass and it was intercepted at the S.C. State 2-yard line.
Reactions: ConwayGamecock